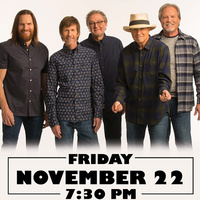 Sawyer Brown’s live shows are legendary. Having been described as “the Rolling Stones of Country Music,” the band bounds onto the stage night after night, delivering its own unique brand of high-energy entertainment. That excitement has been on display since the very first time Sawyer Brown stepped foot onstage in the early eighties. Over the years and over 4500 shows (and counting), the band has earned its place as one of the premier live acts in music. They’ve released twenty-three albums and charted more than 50 singles – including the #1s “Step That Step”, “Some Girls Do” and “Thank God for You” – leading to several CMA, ACM, and CMT Awards and their story is still being written. The hits have just kept coming – “Used to Blue”, “The Race is On”, “This Time”, “Treat Her Right”, “I Don’t Believe in Goodbye”, “Hard to Say”, “Drive Me Wild” – so grab your friends and join the Sawyer Brown party at the Lorain Palace on November 22nd.