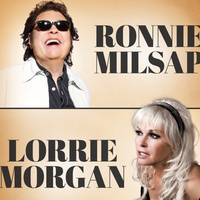 Two of the top country artists of all time come to the Lorain Palace for one night only – Friday, March 1st, 2019  Click here to RSVP on Facebook

Ronnie Milsap used pop, rock and R&B elements to test country’s borders resulting in 40 #1 country hits and 8 gold albums. His Greatest Hits album was one of the first in any genre to go double-platinum. He’s won 6 Grammys, 8 Country Music Association awards, including Entertainer of the Year and 4 more Academy of Country Music trophies, including the lifetime honor, the Pioneer Award. Hits include “(There’s) No Gettin’ Over Me,” a #1 record in country and pop, “Smoky Mountain Rain” (inspired by the recording sessions he played for Elvis Presley), “Stranger In My House”, “I Wouldn’t Have Missed It for the World”, “Lost in the Fifties Tonight (In the Still of the Night)”, “Pure Love”, “Any Day Now”, “It Was Almost Like a Song”, “She Keeps the Home Fires Burning”, “I Wouldn’t Have Missed It for the World”, “What a Difference You’ve Made in My Life”, “Don’t You Know How Much I Love You” and many more.

Lorrie Morgan is the first woman in her genre to begin her career with 3 consecutive Platinum albums. What followed is a career spanning 4 decades with 14 albums, 30 years as member of the Grand Ole Opry, over 8 million albums sold and 25 charted singles, including 3 #1 ‘s. The daughter of country legend George Morgan, Lorrie made her mark on her own merit and refused to be defined by any one style of singing. On “A Picture of Me Without You” and “I Guess You Had to Be There,” she ached with pain. She was feisty and sassy in “Watch Me,” “What Part of No”, “Five Minutes” and “I Didn’t Know My Own Strength.” She has kicked up her stiletto heels in fun on her hits “Except for Monday” and “Go Away.” On her epic “Something in Red” she was an anguished, struggling everywoman. Despite her rough patches, Lorrie says, “I pride myself on my humor. I love to have fun. I’ve reached the age where I feel that I deserve good company around me, people who can make me laugh, who love music and who love to have a good time.”

You're not going yet!