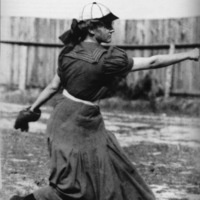 Batter up! The Lorain Historical Society is pleased to announce the schedule of events for the 2019 Literary Lorain program series, held April 8 through 11. With a hard-hitting lineup, this week of baseball-themed events is sure to hit a home run with audiences. Join us as we run all four bases with these events that celebrate historical stories of America’s National Pastime.

All Literary Lorain programs are $5 each, held at the Carnegie Center. Reservations are recommended. Call 440-245-2563 or email info@lorainhistory.org

In the early 1900s, Alta Weiss was “discovered” in Vermilion, Ohio while playing a game of pickup baseball, and she ended up playing professional baseball as the pitcher and only female on an all-male team and league. She even pitched at League Park, the home of the Cleveland Naps (now the Indians)! Weiss used the money she earned to put herself through medical school, and Bette Lou Higgins, a founder and the artistic director of Eden Valley Enterprises, will honor her achievements by presenting the storytelling program of “You Can’t Play Ball in a Skirt!”

Then there’s Mamie "Peanut" Johnson, who loved playing baseball. Opportunities were limited for black women, though, and she was refused a tryout for the All-American Girls League. Johnson never gave up and ultimately became one of only three women to play baseball in the Negro Leagues, the only female pitcher. She gained the nickname of Peanut when an opposing batter said she was so tiny she looked like a peanut (Mamie struck him out!). Kelly Boyer Sagert, who wrote a biography of Johnson in Icons of Women’s Sport, will share her story with us.