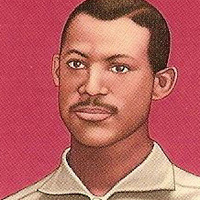 Batter up! The Lorain Historical Society is pleased to announce the schedule of events for the 2019 Literary Lorain program series, held April 8 through 11. With a hard-hitting lineup, this week of baseball-themed events is sure to hit a home run with audiences. Join us as we run all four bases with these events that celebrate historical stories of America’s National Pastime.

All Literary Lorain programs are $5 each, held at the Carnegie Center. Reservations are recommended. Call 440-245-2563 or email info@lorainhistory.org

Jackie Robinson became one of baseball’s most famous players for supposedly breaking the color barrier of Major League Baseball on April 15, 1947. As groundbreaking as his actions were, Robinson was not the first black man to play major league ball. That honor goes to Moses Fleetwood “Fleet” Walker, an Ohio native and Oberlin College student who broke that record in 1884, 63 years before Robinson. Kelly Boyer Sagert, author of Hidden History of Lorain County and of multiple sports books, will share insights into the life of this fascinating man.

Wayne Stewart, baseball historian and author of 34 sports books (mainly about baseball), will take the ball and run with it, sharing unique research into historic black baseball players, those who played in the Negro Leagues and more. His books include Baseball Dads: The Game's Greatest Players Reflect on Their Fathers and the Game They Love, Stan the Man (a bio of Stan Musial who, like Stewart, was raised in Donora, PA). He also wrote Babe Ruth: A Biography.