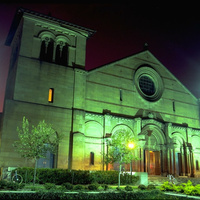 An exciting new operatic work by Nkieru Okoye  that tells of how a young girl born in slavery, becomes Harriet Tubman, the legendary Underground Railroad conductor.

Experience this heartwarming tale of two sisters vowing that nothing but death will separate them, despite the slavery threatening to tear them apart. The music is richly textured, drawing from the musical traditions of opera, gospel, American spirituals, ragtime and minstrel songs.

Based on recent Tubman biographies, the story is narrated and told in the context of Tubman’s tight-knit family of lively characters. Harriet Tubman carries the universal themes of sisterhood, courage, sacrifice and doing what is necessary to keep a family together.

This touring co-production with the Oberlin Opera Theater is part of the Cleveland Opera Theater New Opera Initiative, and is the Midwest premiere of the opera following the New York City World Premiere production in February 2014.